Overland Park, KS, February 28, 2016 – Sweden’s Bluewater water purifying brand is signaling its ongoing commitment to ramping up sales in the United States by showcasing an assortment of its transformational new generation water purifiers at the Chicago 2016 International Homes + Housewares Show, March 5 – 8. Bluewater will show a select portfolio of water purifiers together with the innovative air purifiers of its sister brand, Blueair, on IHHS Booth L11915, Lakeside Center.

“We’ll also be offering any show visitor who stops a chance to fill their water bottles with water as pure as nature intended after being purified by one of our water purifier devices that harness Bluewater’s patented ‘SuperiorOsmosis™’ second-gen reverse osmosis technology,” said North America sales chief, Lin Guo. She noted how Bluewater had evolved rapidly into a major brand and leader in the global water purifier marketplace since the company launched just over two years ago, with strong sales today in Europe and fast-growing footprints in the USA and China.

Ms. Guo points to how over 80 percent of the U.S. population today lives in towns and cities, a global trend that already has resulted in over half of the world's population inhabiting urban areas.

“This unprecedented urban population growth places near-insurmountable pressure on urban water systems, which means citizens concerned about their health and wellbeing must seek point-of-use solutions such as those delivered by Bluewater,” said Ms. Guo. 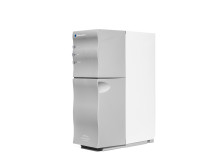 Lin Guo is Bluewater National Sales Representative in the U.S.A., based out of Overland Park, Kansas. 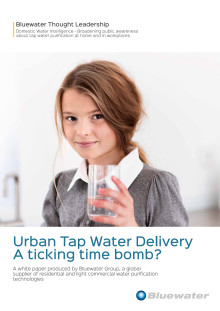 Our drinking water in industrialized and developing countries alike is under threat from decaying infrastructures, climate change and lack of investment. Water is our most precious resource, yet it will probably need something pretty revolutionary to ensure the availability and safety of urban tap water. This latest Bluewater Group White Paper examines the issues and solutions.