Stockholm, Sweden, January 8, 2019 – In April 2018, Bluewater kicked off a “season of action” toward clean water solutions free from single-use plastics and contaminants. Closing out the year, the water technology leader reports progress in advancing its global clean drinking water movement, providing alternatives to single-use plastic, raising awareness on the critical water issues of our time and forging partnerships through investments in a slew of companies in the drinking water arena.

While the world’s natural resources and water quality continued to worsen in 2018 in the face of unrelenting pollution of oceans, lakes, and rivers by contaminants ranging from industrial and agricultural chemicals to micro-plastics, Bluewater’s efforts were geared to help stem the tide of water pollution and contamination.

●These hydration stations were deployed both to key water crisis areas across the world, notably in Flint, Michigan and Cape Town, South Africa

“At Bluewater our philosophy is pure drinking, cooking and bathing water for everyone, everywhere for home use, commercial enterprises and public dispensing and we’ve made strides in delivering on that promise over the past year,” said Anders Jacobson, President and Chief Strategy Officer at Bluewater.

“Water contamination and scarcity issues continue to plague the world’s ever-growing population and pose a threat to planetary and human health. As we look to 2019, our focus is to increase the momentum of this water movement and provide tangible clean water solutions that address failing water infrastructures in the U.S. and elsewhere around the world due to pollution and ageing pipes and plants,” said Jacobson.

Marked by great achievement and powerful results, 2018 was just the beginning. Already for 2019, Bluewater has big plans that will proliferate the drinking water movement into Q1 2019 and beyond, including:

“Our 2018 efforts are a testament of change that can happen when actors across society--corporations, businesses, consumers and governments--come together to create a healthier future,” Jacobson continued. “As threats to the world’s natural resources and human beings’ health continues from sources like plastic water bottles, it is imperative we all act courageously and swiftly.”

“Together, 2019 can be the year the tides are turned on single-use plastics and the global clean drinking water movement radically transforms the future,” added Jacobson. “We at Bluewater hold great optimism for our collective future, and will be ambitious in the year ahead to spark global change, reducing single-use plastics and providing millions with clean drinking water.”

Bluewater is a world leading water purification company with its global headquarters in Stockholm, Sweden. Bluewater innovates, manufactures and comercializes compact water purifiers for residential, business and public use that harness the company’s patented reverse osmosis technology to remove virtually all pollutants from tap water, including lead, bacteria, pesticides, medical residues, chlorine and lime-scale. Please visit us at www.bluewatergroup.com 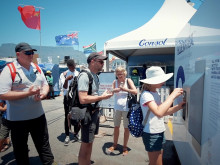 Bluewater is a world leader in innovative water purification technologies and solutions. Discover what we do in homes, places of business...