A newly-released study based on samples at 12 locations from the UK to the Falklands by the UK’s National Oceanography Centre (NOC) concluded that there were approximately 12 – 21 million tons of microplastics in the upper waters of the Atlantic Ocean.

Previous estimates have indicated that the total amount of all plastic waste entering the Atlantic over the past 65 years amounted to around 17 million tons.

“‘It is a shocking piece of research that underlines the huge threat posed to human kind with plastic now in the food we eat, the air we breathe and the water we drink’ says Dee Caffari, a brand ambassador for the Bluewater water company, which has embedded sustainability and plastic free oceans at the heart of its business.

The health dangers to humans and threats to the planets ecosystems of plastic contamination of the environment have been spelt out in a Bluewater white paper entitled The Global Plastic Calamity.

The paper notes that some plastics contain carcinogens and endocrine disruptors that Dr. Yvonne Mirpuri, one of Europe’s leading experts on the key role hormones play in regulating the systems of the human body, described as the ‘number one threat to humankind’.

The NOC study was published in the Nature Communications journal and concluded that there is a cause for concern ‘when plastic is released into the wider environment.’

Bluewater is a world leading innovator of water purification technology for homes, businesses and public distribution and also offers a range of eco-friendly stainless-steel and glass bottles that marry top functional performance with clean design aesthetics, rock solid green credentials, and a lifetime warranty. The company was founded by Swedish environmental entrepreneur Bengt Rittri who has made sustainability a core part of Bluewater’s brand mission. 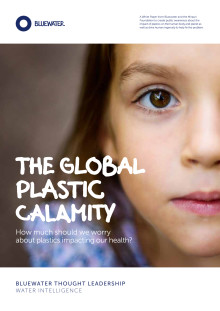